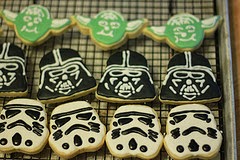 Although there are varying degrees to which people take it, Star Wars fanaticism truly transcends generations, personality types and pretty much any of their defining characteristic of society. They are movies that pretty much everyone has seen and everyone remembers.

With the next wave of Star Wars sequels on the horizon, I thought it might be fun to try to dig up a few Star Wars stats and facts that you may not have known about. Here they are in our famous 10things listicle format. Enjoy!

Amount that Alec Guinness (Obi-Wan Kenobi) made after negotiating for 2% of box office receipts for the movies he was in:


Number of times that Boba Fett's name is actually mentioned in Empire Strikes Back:


The total amount of revenue brought in by the entire Star Wars franchise:

In an early scene in the original Star Wars, there are metallic dice hanging in the Millennium Falcon cockpit to mimic fuzzy dice. They were stolen early on and never replaced. (Tweet this)
(Unfortunately, it cannot be determined if the MF was also meant to have kickin bass and ground effects.)
Another Bonus:

In case you need even more Star Wars stats and facts, here is a great infographic from onlineschools.org with more fun stuff: